Better to be patient than powerful; better to have self-control than to conquer a city. ~ Proverbs 16:32 (NLT) 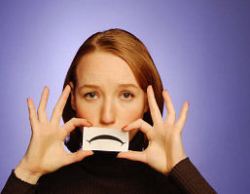 Are you fed up with letting your emotions get the best of you?  Feel like learning how to control emotions is an impossible struggle?

Well, "Nothing is impossible with God!" (Luke 1:37 NLT).  With His help, you can finally learn how to control your negative emotions, and stop letting them control you.


I used to think that if I were a mature Christian,  I wouldn't have any more negative emotions.  I thought that I'd never have a feeling of fear or an emotion of anger once I reached a certain point in my Christian walk.

And, truly learning how to control emotions is only possible when you enlist the help of God's Holy Spirit.

Beloved, I wish above all things that thou mayest prosper and be in health, even as thy soul prospereth.
- 3 John 2

Many Christians get confused about what the Bible means when it talks about our souls.  But, your soul is actually made up of three parts.
When God says that He wants you to be prosperous in your soul, your emotional stability is included.  Controlling emotions is a part of God's plan for your life.


He who is slow to anger is better than the mighty,
he who rules his [own] spirit than he who takes a city.
-Proverbs 16:32 (AMP)

God does not want you to be ruled by your emotions.  He loves you and wants you to have the peace and joy that comes with knowing how to control emotions.

Sometimes we fall into the trap of thinking that we have no control over how we feel.  We hit a challenging situation, a wave of emotions sweeps over us, and we feel powerless to change it.

But, just because our emotions feel powerful, does not mean that they are ALL powerful.

You have the power to overcome your emotions.  Just because you feel them does not mean you have to act on them.


Jesus Shows You How To Control Emotions!

This High Priest of ours understands our weaknesses, for He faced all of the same testings we do, yet He did not sin. -Hebrews 4:15 (NLT)


Sometimes I forget that Jesus faced the same challenges that we come up against every day.  But, Satan's tricks don't change.  He recycles them and dresses them up a bit, but he has been pulling the same old stunts since the fall of man.  And Jesus had to deal with them just like we do today.

What better way to learn how to control emotions than to look at how Jesus handled His.  In our Online Bible Class, Who's Controlling Your Thoughts, we take a close look at a great example of this - Jesus right before the crucification.

In this class on how to renew your mind and emotions, we talked in detail about how Jesus knew what His destiny held, and the battle within that He was fighting.  His date with the cross was growing closer and closer, and His human emotions began to rear their ugly heads.

We don't have time to go into as much detail about this powerful example here as we did in the class, but let's at least take a quick look:


They went to the olive grove called Gethsemane, and Jesus said,
"Sit here while I go and pray." He took Peter, James, and John with Him, and He became deeply troubled and distressed. He told them, "My soul is crushed with grief to the point of death.."
-Mark 14:32-34 (NLT)


Can you even image the thoughts and emotions that must have been going through His mind?  So, what did Jesus, or savior and example, do when He realized that His emotions were raising up against Him?

He sought the Father in prayer.


He went on a little farther and fell to the ground.
He prayed that, if it were possible,
the awful hour awaiting Him might pass Him by.
"Abba, Father," He cried out, "everything is possible for You.
Please take this cup of suffering away from Me.
Yet I want Your will to be done, not Mine."
- Mark 14:35-36 (NLT)


Jesus' desire was for the torment to be taken away.  His emotions were kicking in, and He wanted out of God's plan.  But, more than appeasing His emotions, He wanted God's will.

We can learn so much from this passage.  Jesus felt the fear, but He did not allow His emotions to stand in the way of God's will and God's way.

Our emotions are not the law.  In fact, many times the emotions that we feel are being manipulated by the enemy to stand in the way of God's will for our lives.  He knows that, if he can keep us bound up by fear and anger, he can keep us from walking in all that God has in store for our lives.

Whenever Satan tries to plant a thought or emotion in my mind, the first step I must make is to recognize it as a threat!  It's a threat to my joy, my peace, and my relationship with God.


Look, I have given you authority over all the power of the enemy,
and you can walk among snakes and scorpions and crush them.
Nothing will injure you.
- Luke 10:19 (NLT)


You do not have to bow your knee to the tricks that Satan tries to play on your emotions.  God Himself tells you to "hold up the shield of faith to stop the fiery arrows of the devil" (Ephesians 6:16 NLT).

So, when you begin to have emotions that are threatening your joy and peace, or feelings that urge you to stray from God's plan for your life, do what Jesus did.  Seek the Lord in prayer, and ask Him for the strength to feel those emotions, and do God's will anyways.

The more you ignore your emotions, the less you will feel their control. Then you will have officially learned how to control emotions instead of allowing them to control you.

Many Believers struggle daily with thoughts of unworthiness, anxiety, depression, fear, and the list goes on.  I too battled with my thoughts and emotions for many years.  But, that's not God's will for you!  That's why I believe God led me to create our 7 part online class, Who's Controlling Your thoughts - To share the same truths  He tought me that set me free.  You too can discover the plan laid out in God's Word to renew your mind and break free from the mental strongholds of the enemy.

Finished learning how to control emotions?
Click here to select your next topical Bible Study.