A Five year old who wants Jesus in his heart... but doesn't yet completely understand why.... c2-head***

A Five year old who wants Jesus in his heart... but doesn't yet completely understand why.... 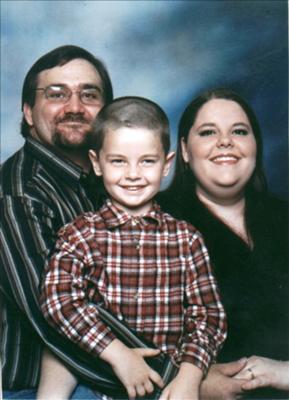 My husband Johnny, me (Keli) and my beautiful son Wyatt.

Tell us a little bit about your family:

I am a re-married mother of one from a previous marriage. I'd like to say he is well adjusted, but he has some quirks and issues we need to work out. (Lying, Stealing etc.) My husband loves him like he was his own, and my son, Wyatt, loves him with all his heart. His real daddy (who he lives with most of the time) and step mom don't go to church or teach any religion, spirituality, or Christianity at all to the children in their home... so when my son comes to see me on the weekend, its the only time I have to instill good Christian values and morals in him and the only time I have to tell him of the love of Jesus. My first husband was a non-believer, though, he knew the bible as well as I did at the time. Just said that he didn't want to be saved, just to go out and keep sinning like he knew he would if that happened. Silly excuse, because there is such thing as forgiveness and repentance. He broke the vows of marriage and we divorced. My new husband of two and one half years, loves the Lord like I do and was saved at a young age. He is the true "Love of my Life." (other than Jesus, who is my number one man) He was never married and had no children before he married me. We want a big family... however, it's just not happening for us. It will in God's time though, I know it and am faith believing that it will.


What would you like to discuss?
I would like to discuss the issue of my five year old son. He lies a lot. When I catch him, I discipline him, letting him know that I still love him and Jesus does too, but that that doesn't mean that he can go out and do whatever he wants just because he knows he will still be loved just as much. I tell him that Jesus doesn't like lies or lying. I explained Jesus dying on the cross... and he CRIED! My five year old understood at least that much. Then I explained that He rose from the dead (I said came back to life) and we can have him to live in our heart with the Spirit, to help us not do bad things like lie. I had explained this to him three or four times when one day he told me... "Mommy, I want Jesus to come live in my heart." I wept like a baby. But I asked him various questions about the crucifixion and why Jesus came back from the dead.. and there are so many crucial points that he does not yet comprehend or understand.

I asked my aunt about this... she said that for right now at this point in his life that it is good enough, that one day he will reach the age of accountability but... I'm afraid his real father will influence his decision when he gets older.. old enough to understand... and tell him what HE believes which is that there is no point in being saved if you are going to go out and sin all over again... and that is not true!!! I need prayer and discernment concerning this matter. Is he ready? The bible says unless we have faith like a child we will not enter the kingdom .. right? He has got faith in Jesus just like he has faith in Santa... and for a child that is a big deal.

Oh and another thing... the other set of parental figures in his life have told him that Santa lives in his heart... of all things. When I first told him Jesus could come and live in his heart.... he was asking me "Like Santa momma?" I had to tell him no.. and asked him where on earth he got the idea that Santa Clause lives in his heart!! That stunned me... I had to explain the difference from the memory of Santa being something in our mind.. and Jesus being a living being that comes to live in your HEART. I'm just at my wits end here. He keeps lying and stealing... but by the end of the time that I have him I ... I just don't have enough time with him to straighten him out. I try so hard... The reason I don't have him ... is because I am bipolar and I went through a time when my ex kicked me out that i had to live in my car... I had to turn him over to them. I couldn't work to support him because of constant panic attacks... So they took permanent custody away from me. I still can't get it back, but I do have an arrangement with them to get him six summer weeks, and a week at Christmas and spring break... and every other weekend during the school year. I miss him so much... it hurts me to see them not training him up in the right way he should go.. all because I wasn't on my guard and satan got the best of me.. made me sick because he knew I was destined to do things for the Lord. I am still recovering. Anyway, I now have a supportive husband and his family love and support me where mine won't. So, I'm getting better and stronger in my faith day by day... I just don't know what to do about my son in the predicament I'm in. Is he ready to be saved? Can I prevent his real dad from influencing him in the wrong way? How can I make him understand... what God's really like and how much love and joy and peace he will have when he accepts Jesus as the Lord and Savior of his life? I'm sorry to have typed a book here... but I am scared for his salvation because of the parental influence on him most of the week. I don't even know if my ex's wife is Christian.. however she did call ME as much as she dislikes me to pray for her dad one time. So they know what I am trying to teach my son.. how do I keep them from sabatoging it? I need to be prayed up... lifted up.. that I know the right thing to do in this situation. I didn't know where else to go.... Thank you if you have read this far... I'll go now.