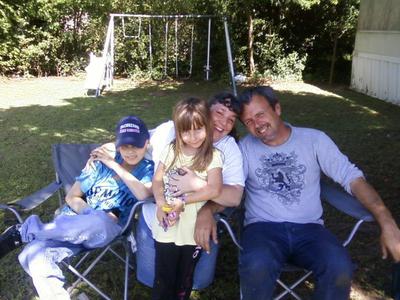 I have had it all in my life. Abuse as a child, molestation, suicide (15 times in 7 yrs. I was in a psych hospital like a revolving door for 7 yrs), cutting/burning. I was not raised Christian. I was a black hole. It got to the point I really felt nothing anymore. I left my 3 boys with my ex husband and just took off to wherever. I was around me but not a daily part of my life. 10 months ago I met a man (whom I married March 4th of this yr) who was the most steadfast soldier for or Lord I have ever seen. He took my broken heart, anger and what everyone else deemed "pycho problems" head on. He never condemned me, or yelled, or even placated me. He listened, and held me, and when needed gave me that swift kick to say "pull it together" He played Christian music everyday. I was Wiccan, full of hate, lacked self esteem from years of abuse and being told what a piece of crap I was, and on heavy psych meds. I used to yell at him "turn that crap off" when I first got here. "There is no God where was he when I was being abused!!! I don't believe in God!!" To which he would give me a hug and say "that's okay Sharla he is real and he believes in you so you don't have to believe in him right now". We met online while I was in a domestic violence shelter (not my ex husband btw a very evil man that took advantage of a hurting girl and used it against me) (I was headed on a bad path with a very bad man. Smoking pot all day everyday, drinking, you name it I had done it). What made Mike bring me into his home I will never know. He said he was told by God..."you get here here I'll do the rest". He had a 5yr old daughter that was partially deaf, and a 12 yr old son that was batteling brain/spinal cancer. He had been a single father for 12 yrs. He seemed to have enough to deal with and really other than on the internet and phone he didn't know me. How did he know to trust me in his home around his kids. But he said he just knew I was a broken bird in need of God not that bitter, hurting girl I was projecting. The only requirement he had is no Wicca in the house around the kids and I would go to church on Wed, and Sun. He said "I don't care if you like it, sleep in the pew, agree with what is said or not but you WILL go". I took a leap of faith and came to GA. One month later in Sept I crumbled at the alter and took the Lord as my Savior. Our son is now terminal and on hospice and it is the most difficult thing I have ever gone thru but I know with God's help we will make it thru this. If you are interested in our story Matt has a prayer page titled "prayers for Mathew Majka" on facebook, or caringbridge.org type in Mathew Majka to find our page. I share this story only because I was told by several people I need to share it because I could help so many people. There is so much more but I am trying to keep this brief. If you want to know more or just need someone to talk to my email is destinyfaith75@gmail.com. I will NEVER judge only help and listin. I have a webpage to prevent suicide that people can contact me http://destinyfaith75.wix.com/sharsserenesantuary and I hope I can "pay it forward" and help someone else. I can sit here now and declare...Yes there is a GOD!! He was there thru it all or I would NOT be here (you don't swallow a new script of lithium made for 600mg 3x a day and never go above therapeutic level without GOD only to name one experience). He was just patiently waiting for me to come to him and ask for help.