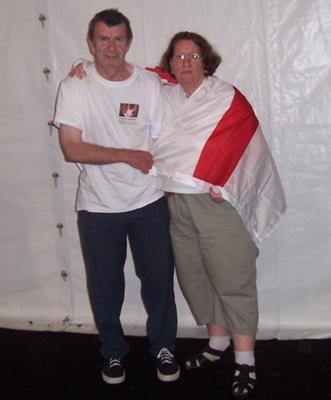 For nearly seven years I watched my husband Len slowly being taken over by Parkinson's disease. I wept as I watched him trying to cope with the pain and trying to get on with his life not knowing from day to day how he would feel. It became nearly impossible to plan ahead because of this reason. Len was taken three different kinds of anti- Parkinson's medication plus other tablets to stop him from being sick anti depressed and pain killers at one time he was taking up to twenty tablets a day.

At night so Len could get some rest I began to massage his back and shoulders with oils and pray for his healing. One night the Lord spoke to me and asked me to tell Len that he was a mighty warrior for God. When I told him he broke down and wept and said how could I possibly be that with this broken body and what could I offer Him I just whispered everything.

I heard that over the Easter period 2003 there was to be healing crusade meetings but because I was busy at my own church we was un able to go. I was delighted to here that the meetings were to be continue, and so I planned to take Len along to them. We went on serval occasion at first nothing seemed to happen at one time he seemed to get worst. On Wednesday 14 May 2003 God completely healed Len. He knew in an instant what God had done. No one prayed for him or was near him as he stood to worship God touch his body and made him completely well.

Its like having a new husband and father for our five children. All the things he couldn't do in those years he can now do. He loves the Lord with all his heart and is a gentle and loving man who wants to spend the rest of his life telling everyone what God has done for him and what God can do for them too. Since Len's healing we have been all over the uk sharing Len's testimony and recently in the past year been to canada and the USA something we thought we would ever do its all by the grace of God