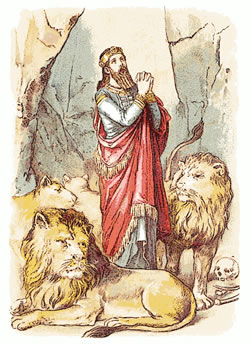 Daniel In the Lion's Den

Click here for part 1 of our Daniel Bible Story

"Bring Daniel to me, said the king. Throw him into the lion's den as the law says. I say to you 'Daniel, may your God spare your life.'"

Look boys and girls, King Darius had Daniel thrown into the lion's den. Don't look boys and girls. This is bad. They are rolling a stone in front of the lion's den and the king has touched it with his ring. Now no one can open the den. The decision is final. I don't understand why the king could not save Daniel. Maybe it would make him look bad in front of his people.

"Guess that will teach Daniel what praying to his god will do for him. He won't be able to help him now. In the morning there will not even be a finger left of him. He will be eaten and we will not have to deal with him any more," shouted one of the men.

"Let's go to our rooms and try to get some sleep. Maybe tomorrow will look better to us. I hope Daniel's god will do something for him.'

"Daniel, Daniel, Are you still alive? Are you alive? Please tell me that you are alive!" the king shouted as he ran around the lion's den. "I have worried about you all night. I could not sleep for thinking about you here in this den with all these lions and that you would be dead this morning."

"O king, My God sent his angel, and he shut the mouths of the lions. They have not hurt me, because I have lived the life that my God has told me to live and he protected me in this place."

"Oh! I can't believe it. You are still alive. I am so happy! Men get this man out of this lion's den at once," the king ordered in a loud voice.

The men lifted Daniel out of the lion's den and the king looked at him and there was not even a tiny scratch on his body.

"Oh Daniel, your God is great. He saved you from the hungry lions. Soldiers, go and get the men that accused Daniel and bring them to me at once," the king roared.

The soldiers went out to find the men.

Boys and girls, this shows us that if we believe in God He will protect us and keep us safe even in the most terrible danger. Let's see what the king will do with the men that accused Daniel of not obeying the king's law.

"Here are the men you asked us to bring in O king."

"Good! Now throw them into the lion's den at once and don't let them escape," the king said in a strong, loud voice.

Before they even reached the floor of the den the lions began to pounce on them and kill them.
King Darius wrote another law that said that all the people should believe in Daniels God and no other gods.

What We Can Learn

Boys and girls this story tells us of Daniel who believed in God with all his heart. When he was faced with death, he kept on believing and trusting in God, and God saved him.

This helped King Darius to see that the God that Daniel trusted and obeyed was the only living and true God. He was the God that would protect us forever.

We can trust that same God today. If you believe in God and trust him he will protect you and your family. God loves us so much and wants us to be safe and protected.

This tells me that God is all powerful and He is the light that leads us through our lives and that we should not be afraid of anyone or anything. God will always be there for us. This is a great promise that God has given us and we should trust God each and every day of our lives.

How can I know that God will be there for me and will protect me?

Another verse in the Bible helps us know another of God's promises for us. Psalm 23:4 which says, 'Yea, though I walk through the valley of the shadow of death, I will fear no evil.' This tells us that no matter how dark or how lonely our lives may be, God is always there and will watch over you and protect you. God is always there to watch over you and keep you safe even when you think you are totally alone. 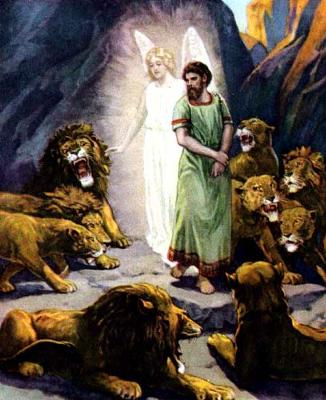 Today boys and girls we are going to travel to a place called Babylonia where there is a king by the name of Darius that rules in that land. He is not a good king. There's a young man by the name of Daniel who had been chosen by the previous king to be a leader in the kingdom. Daniel is a man who believes in God. King Darius had decided to let Daniel be over the whole kingdom because of his abilities.

Let's go and see just what is taking place with the new King and Daniel.

"Did you hear that, the king has made Daniel the head over the entire kingdom. This is just not going to work." the men grumbled.

"We should try to find something to tell the king about him that he will not like. Maybe then we can get our jobs back," one man said.

"Let's go, there has to be something that he will do that we can tell King Darius about."

Look boys and girls the men are leaving and they are angry. They look like they mean business.

Look! There is Daniel and here come those men. I wonder what they will do now. Let's just stay back and watch. This should be real interesting.

"I don't believe it. He is doing everything just right. I wonder if we will be able to find something that we can tell King Darius about him," said one of the men.

"I don't know, but we have to keep watching him very closely. Surely he can't be this good. He has to do something dishonest."

Boys and girls, I can't imagine Daniel being dishonest.

"You know guys, I know of something that we might get on Daniel. He has a very strong belief in his God. I think this will help us get rid of him." one man suggests.

This doesn't sound good boys and girls. Let's see just what this man meant by this.

"O King Darius, may you live forever, the royal administrators and leaders have agreed that the king should give a statement that all the people of the kingdom should pray to you and you only. We also urge you to put this in writing so that it can't be changed according to the laws of the land. We also say that this should go from now until 30 days from now."

King Darius, being the selfish person he is did just that. He signed it and made it a rule that all should pray only to him. This made the administrators and leaders very happy. Now they could get Daniel taken care of real quick.

Boys and girls, I think this could be a time of danger for Daniel. I wonder just how he will react to this law The king signed it. All people of the kingdom will pray only to King Darius and no one else. This will be a real test of Daniel's faith in God. Let's see what Daniel will do.

Look, there go those men again to see about Daniel. They are following him home. I know Daniel has heard about this by now. I wonder what he will do. Let's wait here outside his window and see what happens.

Daniel has heard about King Darius' law and has gone home to pray.

"SHH! Men, listen, Daniel is praying to his God. He is thanking him just as he has done before. I wonder if he does not realize what will happen to him if he is caught doing this."
The men leave and decide to go back at noon to see if Daniel will pray again to his God.

"Come on men let's go back to Daniel's house and see if he will still pray to his God. Listen he praying to his God and thanking him for all he has done for him. Doesn't he know that he could be sent to the lion's den and be eaten alive for praying to his God?"

"Let's go men. Now we have the goods on Daniel. We must tell King Darius now and get this taken care of and get Daniel removed from the King's service."

Boys and girls let's move here out of the way of these men. Come quickly, let's hide over here.

Again the men came to Daniel's home and saw the window open and again saw Daniel kneel down and begin to pray to his God and thank him for all the good things he has done for him.

"Listen men, Daniel is asking his God for help. Let's go and speak to the king about this."

"King Darius, did you not publish a law that during the next 30 days anyone who prays to any god or man except you would be thrown into the lion's den?"

"The law stands, in accordance with the laws of the Medes and Persians, which cannot be changed."

"King Darius, your trusted administrator Daniel has gone against your law. He has not paid any attention to what you have said about praying to gods other than you. We found him praying to his God 3 times a day just as he did before you made your law."

"I just can't believe that Daniel would do such a thing. He is one of my most trusted men and administrators. He has been so honest and has done such a wonderful job in my kingdom. Surely you are mistaken. Surely you saw someone else praying to another god, King Darius cried."

"No King, it was Daniel we saw. His window was open and we saw him bow down and pray to his God and ask him for help, the men said. King Darius this is your law and according to this Daniel is to be punished, right?"

Boys and girls, I think Daniel is in a lot of trouble. I don't know if he can get out of this. He is very special to King Darius and it seems that the king trusts Daniel. If the king does what the law says, then Daniel will be thrown into the lion's den and he will be eaten. This will not be good.

The men have left and the king is deeply hurt and confused. What will he do? Will he be able to save Daniel?

Click here for part 2 of our Bible Story About Daniel in the Lion's Den!