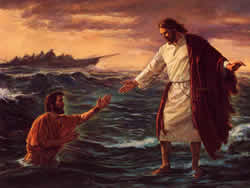 Faith Without Works: It's all true but what now?

I want to tell about a man, that lived a reasonable life. He did not want much in life, living with his wife in a village named Haran. God however had another plan for his life, one day God spoke to this man and told him that he had to take all of his things and move away, into the desert to a land that He will show him, he also had to leave his relatives and family behind. The rest of the story sees Abraham leaving everything and becoming the father of a nation chosen by God. (You're welcome to read the full story in Gen. 12)

Attempting to put myself into Abraham's shoes I reluctantly hesitate to reveal what I would have chosen in the same circumstances. The reality however is that we as God's children are put into the same situation as Abraham everyday of our lives. We have a mandate to carry God's love into the hurting world around us, to do this we have to take the promises of God into account and move into the unknown, to minister to those that seek without realizing it.

Without sounding too complicated, we are Abraham in a different time and place. Taking this statement into account we encounter the core of our character in Christ – Faith. The Bible tells us that with faith everything is possible and that without it everything is impossible.

But faith isn't something new to God's children, we hear about it almost every time that we go to church. The question today however looks at the end of the sermon or talk, it goes beyond the church doors and into the real world, where faith is the last thing that people refer too, it even goes to the point where no one is listening and faith is seen as a religious cliché.

The cause for this is because of the many (me included) that are scared to move into action.
Lets take a look at the book of James, (James. 2: 17) " So you see, it isn't enough just to have faith. Faith that doesn't show itself by good deeds is no faith at all – it is dead and useless." (New Living Translation)
The Message takes a stab at the verse and puts it like this: "Isn't it obvious that God-talk without God-acts is outrageous nonsense?"

Some of you may be thinking that James just had a bad day or something, right. Let's take this verse however and apply it to our lives to get a better understanding of what James was getting at. You're sitting in a meeting listening to the person in front talking about about faith, something moves inside of you and you feel encouraged and ready to go out into the world where you can apply all that you have heard. But stepping out into reality you encounter something else that dries your mouth into a desert and numbs your limbs, I am of course talking about the following question: 'What if I witness and nothing happens, or pray and nothing happens, what if my faith fails?'

This is without a doubt a lie designed to hold every child of God back from becoming what he or she is destined to become. Looking at my own life I can honestly say that this lie has stolen years of my life, keeping and holding me back until the day that the Holy Spirit helped me to do the following.

(Matt. 14:27 - 29) "But immediately Jesus spoke to them, saying, Be of good cheer, I AM! Do not fear. And Peter answered Him and said, LORD, if it is You, tell me to come to You on the water. And He said, Come. And when Peter had come down out of the boat, he walked on the water to go to Jesus." (Modern King James Version)

We read the story of Jesus walking to the disciples on the sea, Peter calling to Him and eventually getting out of the boat and going to Jesus. It was however verse 31 that gave me the assurance to get out of the boat and start living faith instead of only talking about it.

(Mat 14:31) And immediately Jesus stretched out His hand and caught him; and said to him, Little-faith! Why did you doubt?

God isn't looking for the next hero, but rather children not afraid of making mistakes. The lie does not want us to believe that God isn't able but rather that YOU as His child aren't able to do the things that He wants you to do.

Faith grows with us as we grow in our relationship with God. That growth will never be realized if we're not willing to make mistakes in the process. And although I still make mistakes and loose my footing from time to time, I'm taking faith to the streets, learning as I'm going.

So ask yourselves, am I involved in God-talks or God-acts?