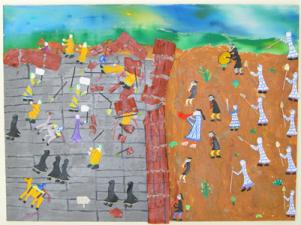 Joshua and Jericho: THE SHOUT HEARD ROUND THE CITY!

Hello, boys and girls. Today we are going on a very special mission. We are going with a man by the name of Joshua. Now Joshua is a man that obeys God and lives his life the way God wants him to do.

Joshua was standing in front of the town of Jericho one day and there was a man standing there with all his armor. Joshua asked him if he was a friend or an enemy. The man told him that he was neither. He was a commander in the Lord’s army and that he had come. Joshua knew at that moment that this man was a very special man if he was a commander of the Lord’s army. He would need to show his respect to him. Joshua immediately bowed down on his knees in front of this man and listened to what he had to say.

The commander told Joshua to take his sandals off because he was standing on holy ground. You're right, Joshua immediately removed his sandals. I don’t know about you boys and girls, if I saw a big man standing there with all his armor on and sword I would do what he said to do. I would be doing it out of fear, but Joshua was doing it because of who the man was, a commander of the Lord's army.

You see boys and girls, God speaks to us through many different ways and we have to be listening for His guidance at all times. 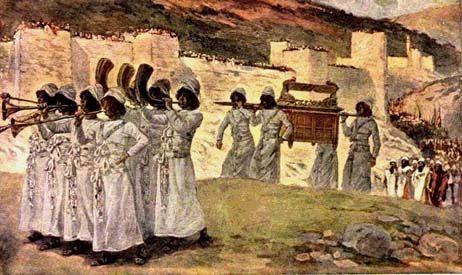 God has instructed Joshua to march around the city once a day for six days with seven priests carrying trumpets and they were to march in front of the men carrying the ark. This is a very large, beautiful chest that carried the Ten Commandments that God had given Moses. All the people were to follow the ark and march quietly around the city once.

Joshua has given the order for this to be done and the people are lining up just as he instructed. Joshua has instructed that some of the army march in front of us and behind us.

Let's get in line and march with them. Are all of you here? This is going to be very exciting, don't you think? What if these people see us, though and begin to throw spears at us and come out and fight us? What will happen to us? Let's stay close and not get separated. Here we go! Keep an eye out for anything that may happen. Be ready to run and take cover!

Hey! We made it and nothing happened. I don't even think those people even knew we were even there. This was very exciting. God did take care of us just as Joshua told us He would. We need to get some rest now. We have to do this for six more days.

This has really been a very interesting six days. We have marched around this city and no one has seen us or even heard us at all. There has not even been anyone that has come out to see what we were doing. It is as if God had made those people blind and deaf. I know that they must have heard something moving around them at some point. We have been doing this for six days. Tomorrow is going to be a big day. We must really get some rest tonight so we can give a loud shout tomorrow. I am really quite tired from all this marching that we have done for six days.


Well, boys and girls, it is now day seven. This is the day that we are to march around the city and the priests will blow their trumpets and when they make a long blast we are to shout with all we have in us and God has promised to cause the walls to come down. God has protected us so far, but I wonder what will happen when the walls come down and the people see us and they have no protection around them.

Joshua is getting the people lined up and we must take our places. This is really going to be interesting to see if this really happens. Joshua is telling us that when we shout, the city will be given to us.

Come on and stay close. I want us to see all this happen. The priests are blowing their trumpets so loud, that I can hardly hear myself think. Listen, there is the long blast.

Great, boys and girls. Look! Boys and girls, the walls are crumbling like something big has just sat upon them. They just fell down. I don't believe it!

It is just as God told Joshua it would happen.

Boys and girls, we have just seen a real miracle!! None of us are hurt and the walls just crumbled and fell down without us having to do anything except to shout.

Joshua has told the army to go in and to take the city just as God commanded them to do. God also told Joshua to only take out the things made of silver, gold, bronze and iron, because these things were sacred to God. The men did just as they were told.

You know, boys and girls, this tells me one thing. God will take care of us if we just do what He tells us to do. We have to be obedient and also have to have faith in Him. There is one thing. We have to be able to hear Him.

But, how do I hear God speak to me?

One question that you may have is how do I hear God speak to me. Does He speak to me in a voice that I hear Him just as I am talking to you? The answer to that is no He does not speak to us so that we can hear Him with our ears. He speaks to us in our hearts.

Proverbs 3:6 says, 'In all thy ways acknowledge him, and he shall direct thy paths.' This tells us that if we do what God tells us and that if we live our lives for Him, then he will speak to our hearts and let us know what He wants us to do.

There is a little voice that is in each of us that tells us when we have done something wrong. When you do something that you know is wrong, don't you feel bad and maybe even a little sick to your stomach? That is the voice of God directing our ways and helping us to always do what he wants us to do.

Does God speak to us through people like with Joshua and Jericho?

Another question that you may ask is does God ever send people to tell us what to do just as He did in this journey we just took? The answer to this question is yes. God has sent you your parents, your pastor, your Sunday school teachers and many other people that love you and want you to always do what God wants for your life. Some times He may even send an angel to guard you and keep you from being hurt when you are in danger.

The Bible tells us in Psalms 112:7 that 'He shall not be afraid of evil things; his heart is fixed, trusting in the Lord.' This tells us that if we keep our hearts close to God and spend time praying to Him and reading our Bibles daily that we have nothing to be afraid of, because He knows us and will keep us safe.

You know, boys and girls, this is a promise that God gives each of when we live our lives the way He wants us to and obey Him. I hope you understand just how important it is to do what God wants us to do in our lives. We have seen that when we do, God looks after us and protects us from danger and will give us a wonderful reward just for doing what He has asked us to do. 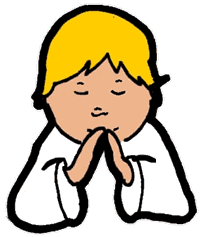 Let's say a little prayer before we end out journey.

Dear Lord, Thank you for giving us your protection and all the people that loves us and help us each day to live the way you want us to. Help me to always do what you want in my life. I love you. Amen

Well, boys and girls, this has been exciting and I hope that you had a great time with me on this journey. I look forward to our next time together. God bless you and keep you until next time.