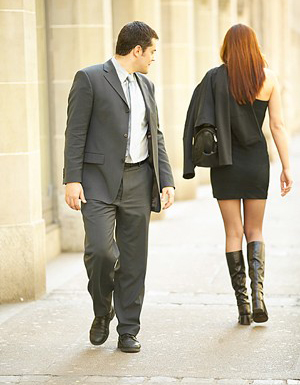 The man goes through four levels (stages) of attraction. Just like in women, age also affects how men are attracted to women. The first stage in a man’s cycle of attraction is the innocence or feeling stage. This is the stage where the man is attracted to woman because he’s got feelings for her. The feeling is usually interpreted to be love. At this stage the man is innocent and sincerely thinks he loves the lady. He can make all the promises in the world to the lady because of the way he feels.

Men usually experience this in their younger years when they have no experience with the opposite sex. He ends up breaking the woman’s heart because after a while, he will outgrow this stage and ‘discover’ he needs ‘freedom’ and cannot cope with the commitment such a relationship demands. Because of the way the relationship is on the high at this stage, he may end up leaving a big void in his woman’s heart for a long time. So many women find it difficult to move on in life when such relationship fails. They find it difficult to let go of the feelings they shared with the man.

Then he moves to the next stage which I call the egoistic level. At this stage, the man is preoccupied with conquering the opposite sex. He feeds his ego by the number of women he can conquer sexually or emotionally. He goes about seeking his next victim. He can spend several months or years pursuing a lady just to satisfy his ego. So the need to conquer a woman becomes his reason for attraction to the opposite sex.

Woe unto a woman who meets a man at this level. The man is most dangerous at this level because all his moves are well thought out and calculated. He knows he’s going nowhere but he keeps leading on.

The third level is the sex stage. This level of attraction is based on sexual attraction. At this stage the man is looking at a woman with SEX in his mind. He becomes attracted to any woman he considers to be sexually attractive. He’s not prepared to be emotionally involved with any woman. All he wants is to swim under the skirt. Most men are bold enough at this stage to let their woman know that they are just interested in her skirt. He’s well defined and knows exactly what he wants. He gets rid of any lady whom he no longer finds to be sexually attractive. He can dump his woman if she puts on weight because he no longer finds her sexually attractive. Sex at this stage is the name of the game.

The last stage of attraction in a man is the marriage stage. At this point, the man places a premium on marriage. He looks at women sieving them to see the one he can marry. He places more value on character, goodness, compatibility etc. Although he still has feelings and still wants the woman to be sexually attractive, yet his basis for attraction is their compatibility in marriage.

I must say again that this is not rocket science. Even after marriage, a man can still resort to any of the levels of attraction mentioned. Any man can easily swing between one level in a backward and forward movement.

But then, the question again is, should a Christian man go through this path? The answer again is NO! What I have discussed is the way the natural man operates. The Child of God operates in a different way. The Christian man waits until it’s time to be married and builds a relationship around that. He seeks God’s will in the matter of choice making and pre-marital sex is simply out of the equation for the Christian man. For him, love is not feeling but a decision to love as Christ loves the Church.

Let me end with the words of the Bible, “Husbands, love your wives, even as Christ also loved the church, and gave himself for it; That he might sanctify and cleanse it with the washing of water by the word, That he might present it to himself a glorious church, not having spot, or wrinkle, or any such thing; but that it should be holy and without blemish. So ought men to love their wives as their own bodies. He that loveth his wife loveth himself. For no man ever yet hated his own flesh; but nourisheth and cherisheth it, even as the Lord the church:” Ephesians 5:25-29

Join in and write your own page! It's easy to do. How? Simply click here to return to Olusegun Mokuolu's Entry Form.