What is Speaking in Tongues:
Does Every Christian Have Access to This
Special Prayer Language?

The [Holy] Spirit comes to our aid and bears us up in our weakness; for we do not know what prayer to offer nor how to offer it worthily as we ought ~Romans 8:26


Have you ever asked yourself, what is speaking in tongues? Many Christian struggle to understand this spiritual phenomenon.

To a spectator, someone speaking in tongues can appear strange. The person may seem as if they are not making any sense. But, they are making perfect sense to God.

What is Speaking in Tongues?


Speaking in tongues is one of the gifts of the Spirit.


A spiritual gift is given to each of us
so we can help each other.
The Spirit gives...the ability to speak in unknown languages.
-1 Corinthians 12:7,10


This spiritual gift is a powerful tool, once you have tapped into it.  And, if you are a Christian who is full of the Holy Spirit, you have access to this special prayer language.

Many people ask what is speaking in tongues a sign of.  Throughout Acts, it was the main sign used to determine if someone had truly received Christ and the Holy Spirit.


He (Paul) asked them,
"Did you receive the Holy Spirit when you believed [on Jesus as the Christ]?"
And they said, "No, we have not even heard that there is a Holy Spirit."
They were baptized [again, this time] in the name of the Lord Jesus.
And as Paul laid his hands upon them,
the Holy Spirit came on them; and they
spoke in [foreign, unknown] tongues (languages)
and prophesied.
-Acts 19:5-6 (AMP)


Another scripture that exemplifies how speaking in tongues was regarded as proof that someone had received the Holy Spirit is in Acts 10.


The Jewish believers who came with Peter were amazed
that the gift of the Holy Spirit had been poured out on the Gentiles, too.
For they heard them speaking in tongues and praising God.
Then Peter asked, "Can anyone object to their being baptized,
now that they have received the Holy Spirit just as we did?"
- Acts 10:45-47 (NLT)


When Paul says that these Gentiles had received the Holy Spirit just as they had, Paul is referring to the day of Pentecost.  That was the day when "they were all filled with the Holy Ghost, and began to speak with other tongues, as the Spirit gave them utterance" (Acts 2:4 ).

Since speaking in tongues is definitely linked to being filled with the Holy Spirit of God, we know that it must be of God.  Not made up, or even of the devil, as some would have you believe.


What is Speaking in Tongues Used For? 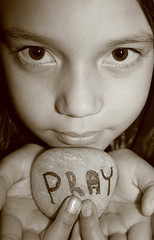 The main purpose of speaking in tongues is to help you to pray and connect with your Heavenly Father.  It allows the Holy Spirit, with all of His wisdom and knowledge, to intercede and pray on your behalf!


And the Holy Spirit helps us in our weakness.
For example,
we don’t know what God wants us to pray for.
But the Holy Spirit prays for us
with groanings that cannot be expressed in words.
- Romans 8:26 (NLT)


We all have situations that need prayer.  For most of them, we only know half of the story - The half that we can see.

But, the Holy Spirit knows the whole story.

Imagine that your child is going on a field trip.  You begin to pray for their trip like you normally would - with your understanding.  But, then, you also begin to pray in the Spirit.

What is speaking in tongues through the Holy Spirit going to accomplish?

The Holy Spirit knew that there would be another child on that bus.  A child who had brought marijuana with him, and planned to ask your child to join in on the fun.

The Holy Spirit knew that the bus had run over a nail the week before.  That it had a slow leak in a tire that was about to blow.

The Holy Spirit knew more than you did!

But, since you let God's Spirit intercede for you by praying in tongues, God answered the prayers that you did not even know to pray yourself.

When you pray in the Spirit, you open yourself up for the Holy Spirit to direct your words.

Your prayers go directly from your mouth to the ears of God.  And you begin to feel a special connection with your Father, because the two of you are the only ones who understand your pleas.

What is speaking in tongues going to transform in the deeper areas of your life?

As you pray in the Spirit, something else amazing happens.  The Holy Spirit leads you to pray for those broken places inside of yourself.  For the pains and fears that you cannot even put into words.

But God's Spirit can.  And, as you release those things to your Heavenly Father in prayer, He heals you, and makes you whole.

Just imagine Satan's frustration when he realizes that you are launching a huge attack against his kingdom, but he can't even understand your battle plan.

Is Speaking in Tongues for Everyone?

Just like in the book of Acts, any Christian who has received the Holy has also received this special prayer language.

Just because you have never spoken in tongues does not mean you do not have the Holy Spirit. Tongues is a Gift of the Spirit ,and like all Spiritual Gifts, it does not necessarily come all at once.

And, just because you have never spoken in tongues, done not mean that you can't.

Sometimes, people actually have the ability to speak in tongues, but they don’t realize it.

They never step out and begin speaking in tongues, because they are waiting for the Holy Spirit to force them to do it.

They think that speaking in tongues will be some uncontrollable urge that will somehow overtake them - Like some kind of possession.

Because of the immense power available through this gift, Satan often tries to stop people from stepping out on faith and speaking in tongues.

He tells them  that they are making the words up, or that they look like an idiot.

But, there is a reason Satan wants you to stop. Or, even better, not to start at all.

What is speaking in tongues going to unleash on your enemy?

What a powerful foe he would have, if you actually grabbed a hold of your Private Line to the Father, and began praying.  Praying for yourself.  For your family.  For your city.  For your country.

No wonder Satan tries to so hard to convince us that we can't speak in tongues.  Call him on his lie, and allow God's Holy Spirit to to take your prayer life to the next level.

*Don't miss the special video below!

Science Proves...We're Not Making It Up:

What is speaking in tongues?  Are Christians just making all of this up?  A 21st century scientist discovers that we aren't.  Because, if we were, our frontal lobes (the parts of our brain responsible for language and deep thought) would become more active during speaking in tongues instead of nearly turning off completely.

Scientifically proving that the speaker himself is NOT in control of what's coming out of their mouths.


Finished with What is Speaking in Tongues?
Click here to select your next topical Bible Study.